Doubt is the enemy of creativity. Every new idea brings hard on its heels the haunting thought that it can’t really work after all.

Maybe some people don’t suffer from doubt and self-questioning, but I believe that most creative people do. (Can I get an amen?) Somehow, doubt is as much a part of the creative process as the very seed of the idea itself.

No series on creativity would be complete without dealing with the challenge of doubt. In fact, it’s such a big factor that I’m devoting two posts to overcoming doubt. Let’s get started with part one… 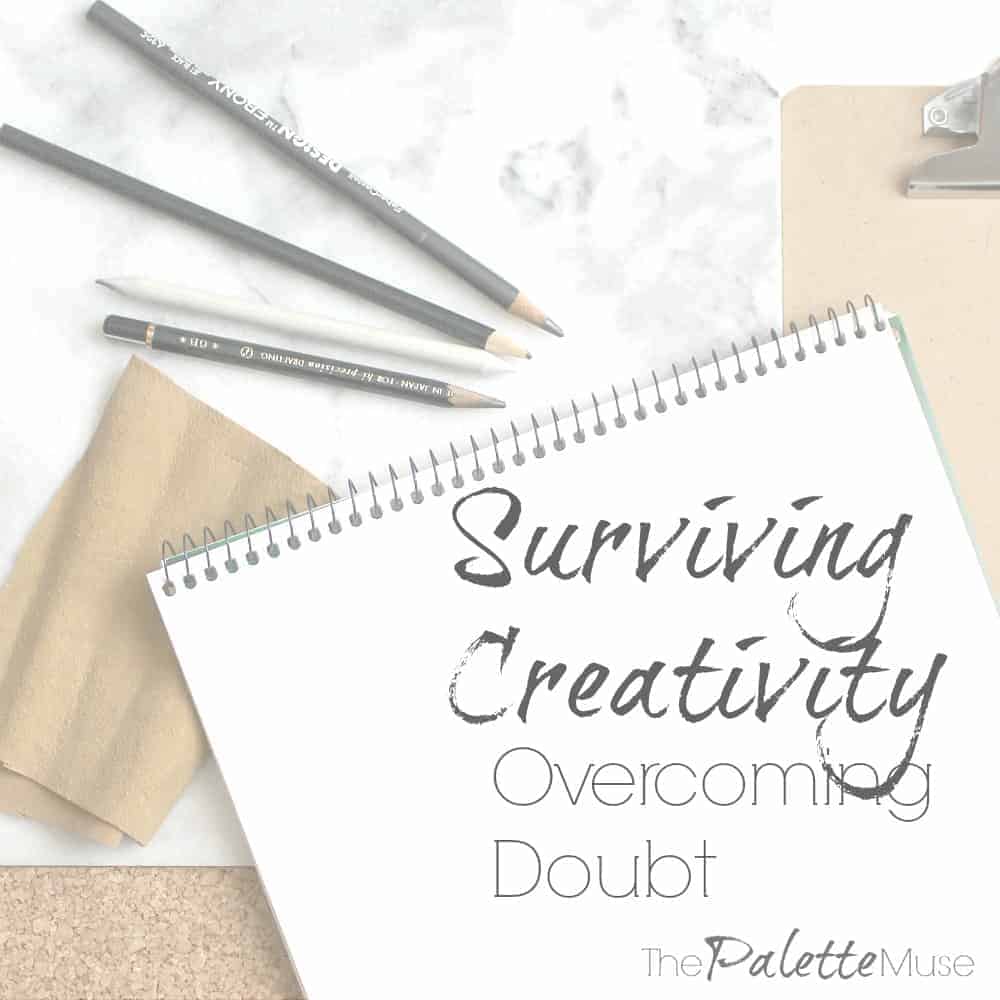 But first, if you haven’t read the rest of my series on Surviving Creativity, check it out so you know where we’ve been already.

As we walk through the creative process, along the way we fear everything from abject failure to great success. Everything from “They’ll laugh at me” to “What if lots of people want what I’m making and I can’t keep up with demand?” Or even, “How will this affect my family if this project really takes off?”

True Story: I was daydreaming recently on the way back from a camping trip about becoming a famous author. Wouldn’t that be fun? I can see myself holed up in a little cabin writing and drinking coffee all weekend, pacing around in a bathrobe as ideas come faster than I can type them on my vintage Smith Corona. Just as I was working up to the successful part, I realized that famous authors usually have to go on book signing and publicity tours, and how could I be away from my family that long? It sounds like a silly thought, but it had me crashing down to reality and moving on to more predictable career choices in an instant, after a good half hour of dreamily constructing this fantasy. Fear of success.

Fear of failure can be a little easier to pinpoint than fear of success, but really they both occupy two sides of the same coin. This is because we know that success only comes with sacrifice. No one achieves great success without spending something of themselves along the way. That’s why I think the fear of success is linked to the fear of failure. If we realize great success with our goals, will that mean failure at home, or giving up too much of something that means everything to us? We forget that most things in life happen as a result of a long process, and along the way, we’ll learn to manage the risks that threaten us either with failure or success.

On Failure and Raising Teenagers

Here’s another true story. Shortly before I became pregnant with my first child, I remember having a conversation with my mom about how hard it is to raise teenagers. I was considering not having children because I couldn’t imagine how I could be a good mother to a teenager. I mean, I remember what I was like at that age, and I wouldn’t wish that on anyone! She laughed and told me something very comforting that I’ve always remembered. She said,” That’s why God gives them to you first as babies, so you grow to love them so much that by the time they’re at their most unlovable, you already adore them too much to give up.”

Lest you think this is turning into a parenting blog, let me bring it back to what we’re talking about. I’ve remembered that concept many times over the years, as I’ve started new projects that were “my babies.” When you have a creative idea, it starts as something small that needs lots of nurturing as it grows. You don’t just skip to adulthood with an idea. You’ve got to take care of it, feed it, spend lots of late nights on it, and generally love it into being. And by the time it’s big enough to become a success, you’ve learned a thing or two about how to manage it along the way. (I think this is why overnight celebrities get themselves into so much trouble, but that’s a topic for a different blog.)

My point is, you don’t need to fear success any more than I feared raising teenagers. Yes, you go through hard things along the way, but you learn from it and it’s always worth it in the end.

Now, I have to add my disclaimer here that my oldest daughter is almost 12, so I may have to revise this whole theory over the next few years. I’ll keep you posted…

So how do we overcome our doubts, and get started?

If faith is the opposite of doubt, then action is faith with feet. What I mean is, we get over our doubt by doing. We must do the very thing that scares us. Simply by starting the project, we dispel some of the haunting thoughts that keep us from moving forward, and miraculously, we move forward, simply by doing so.

There is nothing more fear-inspiring than a blank canvas. Or a large sheet of white paper. Or an empty computer screen.

What seemed like a big idea suddenly shrinks to something small and unworthy in the face of the first brushstroke. This is why, when I start on a new painting, I generally put down a wash of color first thing on the canvas. Banish the blank canvas, and simply start.

So have a little faith, just enough to pick up the brush, or pen, or camera, and start working. Maybe your doubts will actually be realized, but even if you fail, you are working towards something that will ultimately grow your creativity and make you more into the person that you want to be.

The work is worth it. You are worth it. I have no doubt about that.

Next time, I’ll share some ideas with you about how to get over your doubts and get going, if you find yourself wanting a little more than the “Just do it” approach.

I've always found it interesting that there are probably as many people afraid of success as failing. I tend to tell myself the line you mentioned that somebody is probably already doing this. That can really be a killer of a lot of ideas.

I couldn't believe it myself, when I first heard of the concept, but then I started realizing that it totally applies to me! One thing I've learned through blogging is that there's always room for your idea, even if someone has already done some version of it.

There's so much to be said for simply starting! I get so hung up on that when it comes to making time for my creative writing. I've recently re-tooled my freelancing schedule so I can at least use one hour a week of my office hours to work on creative stuff. It's not much, but often the smallest amount of time can work wonders as a catalyst.

That's so true Jeri! Even an hour will give you a chance to clear your mind of some of your "tasks" so you can just create. It will pay off!

Awww, you're making me blush! Thanks mom!

Yes you can get an "amen" or maybe even a dozen. Just do it has always worked for me!

So glad to know I'm not alone Jacquie!

I love this, Meredith! I'm always glad to hear of your pursuing your interests, and creating. It is an encouragement to others!

Thanks Emily! Just knowing that is an encouragement to me too!