No one likes to fail. I would bet it ranks pretty high on the list of people’s worst fears in life. I know it’s one of mine. I hate to go out on that limb, try something new, and possibly not succeed at it. Which is why I have a hard time trying new things, especially in front of people.

I don’t want that for my kids, and I have a feeling that the only way to help them get over that fear of failure is to let them experience it a few times, completely fall on their faces, and then pick up and keep going. 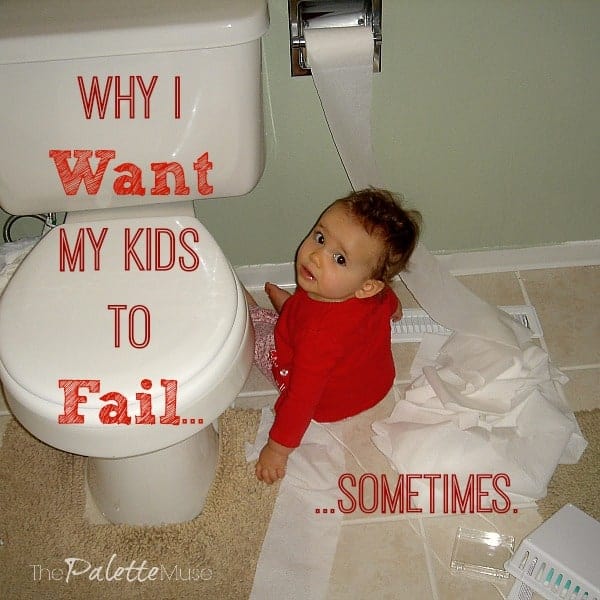 Everything inside me screams “Nooooooo” when I think about my older daughter possibly botching her piano recital piece, or my younger daughter falling off the balance beam in gymnastics. I want to swoop in and save them from themselves. Not because I’m embarrassed of their failures, but because I know they’ll be embarrassed. And maybe want to give up.

There are worse things than failure. I’m not sure what they are right now, but I believe that to be true. Maybe worse than failure is missing out.

We all know that parent who hovers over their child at all times on the playground, waiting to catch him if he falls off the end of the slide. And God forbid he should attempt to jump off the swings.

I know because in my heart I am that parent. What if she hurts herself? I’d feel terrible. I was amazed when my kids went off to kindergarten. They came home with scrapes and bruises that would have crippled them merely weeks before, and they were showing them off, bragging that they didn’t even cry! (Peer pressure can sometimes be a good thing.)

But I digress. I’m talking about real failure, not just scratched up knees. My second grader is working on a report, and I’m not supposed to be helping her. But I want her to do well, so maybe just a little help would be OK, right? Well, yes, but when she says “Mom, that’s not how I want to do it” I just need to let her do it her own way, and trust that it’s all part of the learning process. Maybe she could get a better grade if I help her with the wording, or add a few things here and there, but what’s that teaching her? That I care more about her grade than about her learning to do it herself. Ultimately, that will be defeating for her.

Here’s what I want to teach my kids:

You can do anything you set your mind to. And I will love you and support you whether you succeed or fail.

Here’s what I’m afraid we are actually teaching our kids in this generation:

You can do anything you set your mind to. As long as I help you.

It’s not just that I want my kids to succeed in life. I also want them to be happy. And success doesn’t always bring happiness. Sometimes it just brings more stress as you strive to reach that next level. Success for success’s sake is empty. But success in something that’s your calling in life, or that makes you happy, or lets you help others, or supports your family, now that is a good thing to reach for. How will kids know the difference if we teach them the only thing that matters is that they succeed?

I believe there is great value in failure. Here are just a few things kids can learn from failure:

Resiliency. It’s OK to fall down. You just get up and keep going. Maybe you stop by to see the nurse first and she gives you a princess band-aid to make you feel better.

Problem Solving. Sometimes a failure points out where your weaknesses are. That’s no fun, but when you identify something you can work on, and then work it out, you’ll know that you overcame it. And that can be more satisfying and fulfilling than succeeding in the first place!

Perspective. We are all in this life together. We all have strengths and weaknesses. But when all you see are other people’s strengths, you start feeling like everyone else has it more together than you. If we were a bit more open with each other about our own failures, I believe we’d all be a bit more tolerable.

Unconditional Love. This is the big one. This is the rock upon which healthy kids are built. If they sense that you love them more when they succeed, what does that say about when they fail? We tell our kids all the time how much we love them. But what happens when they fall apart during the spelling bee? Or that math concept that they just can’t seem to figure out? Those are little things now, maybe, but our reaction to them will foreshadow our reaction to the bigger issues later on down the line. If they can’t bring home a failing grade to us in fourth grade, what about when life really gets dicey in their teenage years?

My kids’ failure gives me a chance to put my arms around them and say, “It’s OK. I love you no matter what and we’ll get through this together.”

I truly believe that when they are little, the little things ARE the big things. The things that they are experiencing in grade school (and our reactions to them) are how they learn to deal with the bigger issues that come along later in life. If they learn nothing else now, I want them to learn that I love them completely independently of their accomplishments. Unfortunately, I can say that every day to them, but it’s in the down-and-out moments that they hear me. So if I don’t allow them to fail sometimes, then I have no opportunity to love them through it.

On Sunday, our pastor made a really interesting statement. He said, “God does not define us by our weaknesses. He defines us by His love for us.” That really blew my mind. I think I define myself by my own weaknesses, but God sees me through his perfect love for me. And that doesn’t change, no matter what I’ve failed at this week.

Sometimes we call that grace. That’s what I want my children to learn, and that’s what I get a chance to model to them when they fall down. If they never fall down, then they think I love them because they’re so good at what they’re doing. I know because that’s how I feel in my own life.

Failure is a chance for redemption and unconditional love, and we all need that more than we need to succeed.

So get on out there, kids, and fail at something, so I can show you how much I love you! (If they’re anything like me, we’ll get that chance before the day is done.)

That brings up one more little note on this subject. Not only do I need to let them fail sometimes, but I need to let them see me fail too. Ouch. I think we already covered how much I hate to fail in front of people. But why am I afraid to fail in front of my kids who are still young enough to believe that I can do no wrong? Maybe that’s why. I like this little period of life. Someday soon, they’ll start thinking instead that I can do no right and want to distance themselves as much as possible from me, and I don’t want that day coming any sooner than absolutely necessary. Although that’s probably determined more by their biology than by my failing at something. In other words, that day will come whether I’ve been the perfect mom or not. I guess part of being the perfect mom is not being perfect all the time. Hopefully they’ll see me falling down, getting up, asking for forgiveness, and not looking back. But there’s no way for them to see that if I never share my failures with them.

I don’t want to pass down the legacy of my fear of failure. If we’re going to fail at something, let’s get after it! Let’s do it, and see that it’s not so bad.

I had a band director one time who would always say, “If you’re going to hit a wrong note, do it loud and confidently.” That sounds like a good life motto.

So here’s to loud and confident, in both success and failure! And grace. Lots of grace, for ourselves and for each other.

This is really good!! I've been thinking a lot about this lately - for myself and my kids. Failure means we're trying!

[…] The Palette Muse wrote and excellent post on why it is good to let your kids fail… sometimes. https://thepalettemuse.com/why-i-want-my-children-to-fail-sometimes/  […]

In my opinion failure motivates you to be better. If I didn't fail at some things when I was younger I would probably be an arrogant idiot. Failing teaches you to be be humble and to never give up.

So true! Humility is a character trait that is hard to learn the easy way.

As a practical matter, I'm not so sure that it's a good idea to teach your kids that "You can do anything you set your mind to." We can all think of things that we are simply not cut out to do. In the immortal words of Clint Eastwood, "A man's gotta know his limitations."

In my opinion, it would be better to say something like: "If you're interested in X, then by all means have a go at X, and if you're successful at X, then that's great, and if it doesn't work out and you decide to pursue Y instead, then that's fine as well." To put it another way, I think that parents should show a certain flexibility with respect to their children's interests. (OK, maybe I am reading too much into your blockquote, but you can see the point that I'm making.)

BTW, being a phony is definitely worse than being a failure - in my book at least.

That's something I've wondered about often, Andy. Do we do our kids a disservice telling them they can do whatever they want? I go back and forth on that particular parenting issue. Some day my kids will be able to tell me whether they think I did it right. (Yikes!) But I totally agree with you that it's worse to be a phony than a failure!