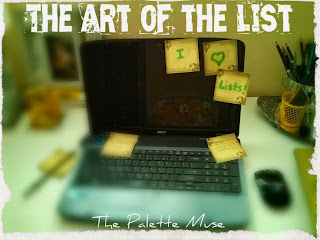 I had a realization this morning, as I was making a list of things to do and two of the items on that list included making another list.  The realization probably should have been, “I have a problem.” But no, the realization was this: “Lists make me happy.”  I don’t mean happy in the sense that I have fun while I’m writing down the sixteen items that need to be done today.  What makes me happy is coming back throughout the day to mark off each item as it gets done.  Even better is getting rid of that nagging feeling that I’m forgetting something.  I just jot it down, and it’s official.  I have not forgotten.  I just haven’t done it yet.

Lists are a procrastinator’s best friend, and no one procrastinates as proficiently as I do.  My husband claims I’ve made it into an art form.  My coworkers used to call me “Scarlett”, after Scarlett O’Hara in Gone With The Wind saying, “I’ll think of that tomorrow,” or something to that effect.  Hey, at least I’m consistent.  But there are times when procrastination can produce stress.  Like waking up the Monday after Thanksgiving and realizing you haven’t started Christmas shopping yet, or worse, shopping for your mother-in-law’s birthday, which is in 4 days. These are the times when you need a list to get your heart rate back down.

So, to procrastinate on my gift shopping for just a bit longer, I am giving you my secret recipe for a great list. Alright, let’s call it what it is:  A list for how to make a list.  I can’t tell you what to put on your lists, but I can tell you how to create them in a way that will make life easier for you, and just might make you calmer and happier, especially at this hectic time of year.

Obviously there is no right or wrong way to make a list.  These are just some of the things that help me.  So if you’re feeling stress this holiday season, try making a list.  It worked for Santa!

Surviving Creativity: Do Less in More Time - The Palette Muse

[…] love lists. I like making lists so much that I wrote a whole post about it. Can we all just agree that making the list of things you have to do today is the easiest and most […]