As a kid, I loved to visit my grandparents’ home in the summers. We would pile in the car, drive 5 hours, and end up in another country. Well, I guess it was still Texas, but it felt like a different place entirely.

Growing up in Dallas, I thought my grandparents lived on a farm in the country. Once I got older, I realized they lived in a city too – their house was just on a much bigger lot than our little postage stamp in Dallas.

They had chickens, a garden farm, and even a pond, stocked with fish. Stretching for what seemed like miles behind their back yard was…the woods. Real woods. As in, more than two trees.

The gateway to the woods was marked by a two huge pine trees, from whose branches hung the longest tree swing you’ve ever seen. It was just a wood plank strung between two ropes thrown over a tree branches, but it may as well have been a catapult into the world beyond.

I don’t remember my grandparents’ house having any toys. Maybe a set of dominoes, but that was it. What they did have though, was a wheelbarrow. And shovels. Who needs toys when you have such wondrous instruments of destruction at your chubby little fingertips?

One year, we dug a hole to China in the chicken coop. Then there was the time my cousins and I brought a tomato worm into the house, and somehow it ended up bouncing off the ceiling fan and disappearing. We were sure we’d be in big trouble for that one, but apparently the worm never resurfaced in the house. (I always imagined it got chopped into tiny pieces by the fan. Probably it was just too small to see.)

I lost my brother in the woods. And caught a fish in my long hair while swimming in the pond. (Neither I, nor the fish, was very happy about that.)

Always in the yard, there was my Gran-Gran smiling in his blue coveralls, ready to give us a ride in the wheelbarrow, and Mama-C in the kitchen making banana pudding.

These are the things summers are made of. 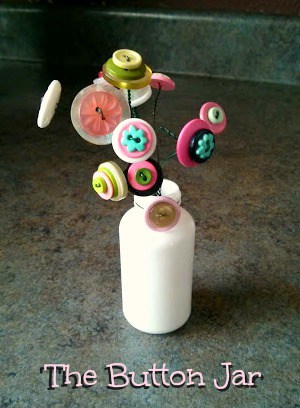 My grandmother had a button jar. Probably most of your grandmothers or mothers had button jars too. I think anyone living through the depression, or before, saved buttons. Every item of clothing had multiple uses and usually several owners. When it was beyond saving, the buttons were removed and saved for something else, and the clothing was cut into rags for cleaning and mending. Buttons cost money.

These days, buttons seem to come almost for free. Every shirt you buy has a little plastic pouch attached, with an extra button. What do you do with those buttons? If you’re like me, you throw them in a drawer, knowing that if you lost a button off that shirt, it’s more likely you’d buy a new shirt than hunt down the extra button. (Not to mention hunting down your sewing kit.)

I remember on lazy afternoons turning the button jar over and over in my hands, watching the bits of wood, bone, plastic, and metal tumble around inside the glass, like looking into a kaleidoscope. There was so much kinetic energy stored in those buttons. So much possibility. I don’t know if she ever used any of those buttons, but I bet she would no sooner have parted with them than she would have parted with me.

Turns out filling a jar with buttons takes a long time. Maybe a lifetime.

I was organizing some of my craft supplies this morning, and found a few buttons I had bought for a project and never used. With my grandmother in mind, I went and dug up a mason jar and put the buttons inside. Hmm. Five buttons in a jar are not as impressive as I thought they’d be.

So I went to my drawer in the bathroom where I’d been tossing all those packets of replacement buttons. There had to be 30 buttons in there (never once have I actually used one to replace a button). I painstakingly opened each packet and poured the buttons inside one by one, savoring each clink as if it were a coin dropping into a piggy bank.

Still, barely an inch of my jar is filled.

New respect dawns on me as I contemplate how long my grandmother must have saved those buttons. I wonder what happened to them? Probably sold at an estate sale for $1 for the entire jar. I guess I could go down to the thrift store or find an estate sale and buy myself a whole jar of buttons, but where’s the fun in that? I’ll set my jar up proudly in my laundry room, and fill it one by one. 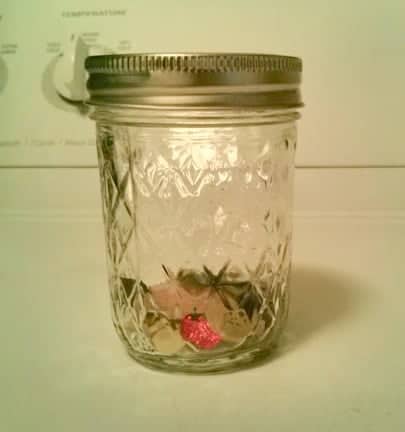 Maybe by the time I’m a grandmother, my jar will be full. Maybe my grand-kids will gaze at it like I once did, wondering what they could do with all those buttons.

Probably not. We’ll have too many toys.

That’s it. No toys for my grand-kids. Sorry guys!

Today is the first day of summer vacation for my kids. As I contemplate what we’re going to do with all our time, I’m thinking maybe we should just get out the wheelbarrow and a couple of shovels.

Maybe I can find my grandmother’s recipe for banana pudding and teach them how to make it. Or maybe we’ll go in search of a tomato worm to fling into the ceiling fan, for no apparent reason.

Happy summer vacation, everyone. Go make some memories. And save your buttons. You never know when you’ll need them. Either for a shirt, or a kaleidoscope.

I still keep my Grandma's buttons jard, she used to conserve here every additional button she had. Grannies had a lot of respect for the items, they didn't waste things easily :)

Yes, I think they had the right idea. Sometimes I wish we were more careful to conserve things, rather than just dumping them and getting something new. Plus, they take on more special meaning, as they get passed down through generations.

When my grandma passed away, I was lucky enough to inherit her button collection. It fills a shallow Tupperware tub like the kind you can store rolls of wrapping paper in. There are so many different varieties of buttons, and I sorted them by color a few years back. Eventually, I intend to glue them to photo frames and give them as gifts to family members.

Wow, I think you win the prize for the most buttons! :)

We too have an age old jar in our house with buttons of all shapes, ages, sizes and colors.. They are a perfect example of UNITY in DIVERSITY..lying in the jar in peace for ages.Lol... In the first picture you have shown a very innovative way to make good use of buttons. It looks so cool.

I like that - Unity in Diversity! Thanks for dropping by!

Hi Meredith, Thank you for a delightful story. I like how you described the bigger than life memories of childhood and what your button jar means to you. My wife has an old three-tray sewing box and in the bottom is a jar full of buttons of different shapes, sizes and colors.

Thanks Bill! Who knew that humble buttons could become such a metaphor for a life well lived?

What a beautiful, beautiful post! I'm going to link to it for a post I just started for a button craft my daughter and I have created. I'll let you know when (hopefully next week). Your memories were so sweetly detailed. Made me smile at the thought of such loving moments. Thank you for sharing.

Thank you Dana, I love that idea! Can't wait to see the craft you're working on...