This morning, as I was driving back to the house from the grocery store, to retrieve the list that I only realized I had forgotten as I was walking into said grocery store, after finding the only parking spot in the parking lot, I was reminded of something a new friend said to me recently. She said, and I quote,

“I read your blog before I met you and I thought you were this perfect mom and designer, who has it all together, and I thought ‘She would never be friends with someone like me’.”

I also had another friend tell me he had thought I was the organized and efficient one (between me and my husband) and he was shocked to discover that he had us backwards. I asked him what would give him such a silly notion, and he replied, “Well, I read your blog before I really knew you.”

Apparently, I’ve been misleading all of you, so I thought I should take a few moments to point out some realities that may not usually show up here on the blog.

This falls under the category of “Don’t compare your outtakes to someone else’s highlight reel.” (I don’t know who said that, but I think it really applies to the world of blogging, where we put our best projects on display, and don’t tell you about how we snapped at our kids while we were trying to finish that project, or how we had to try it 3 different ways before getting it right, as I did with my last project, the No-Sew Bunk Bed Tent.

Those of you who know me already will likely know these things about me (thanks for being my friend anyway!) and those of you who don’t already know me should be warned of what you’re getting into. So here it is – my confession. My list of reasons you may not want me as a friend. Or at the very least, a good warning label for the whole blog… 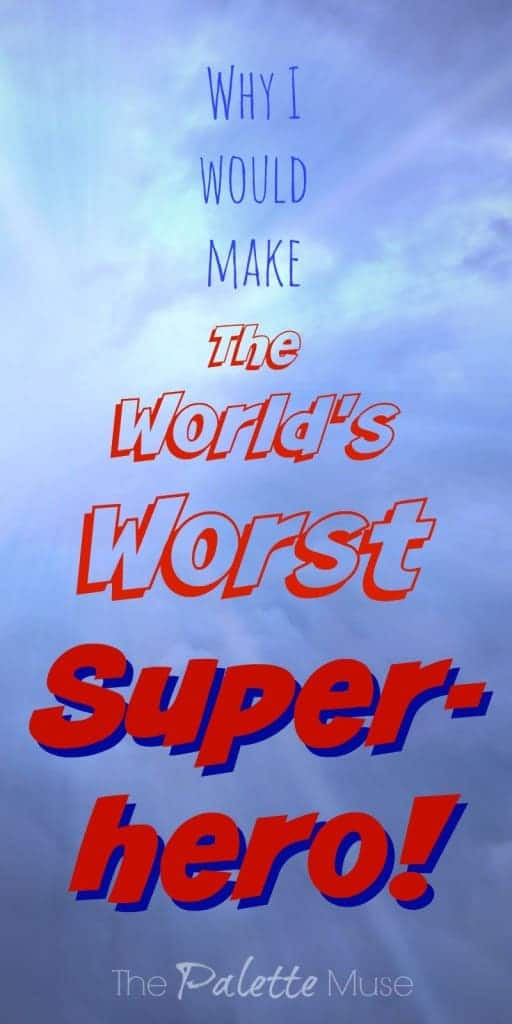 Why I would be the world’s worst superhero:

So if you’re thinking of being my friend, but are intimidated by my apparent awesomeness, fear no more. You are probably twice the woman I’ll ever be and I’d be improving my station in life if you allowed yourself to be seen with me. If you’re thinking of hiring me for a design job, I’d think again if I were you. But on the plus side, I may completely forget to bill you for the job, so maybe it’s not such a bad gig for you.

At the very least, don’t make the mistake of reading this blog and thinking that I am somehow more with-it than I really am. I’m no superhero, but I do occasionally have a flash of inspiration. Now, if I can just sit still long enough to capture it here, then thanks for reading it. And as always, I’ll tell you what I tell my kids: do as I say, not as I do!

Sidenote: my friend who I quoted at the top of this post is an incredibly sweet, loving, generous, and all-around fabulous person, and I’ve often thought the same of her, “Why would she want to be friends with me?” I guess it just goes to show that we all have a bit of insecurity and the tendency to think others have more than we have. I bet even Superman thought he’d never stand a chance with Lois. Maybe life would be better if we just tried being friends more, and worrying less about what others think? Just an idea…maybe my best one yet.

Being able to be truthful with ones self only makes you stronger. Sounds like a superhero to me! Thanks for sharing at the #HomeMattersParty - we hope to see you again next week. :)

Thanks Lorelai, I'll definitely be there!

We all probably seem to be different from what we really are when people only know us from our blog posts. Last week my post was about making a big mistake and then admitting it. I guess it must be in the air - letting people know that we have faults!

Maybe it has something to do with spring cleaning, airing out our dirty laundry? It's good to be able to admit your mistakes.

Brave of you to confess!!! We all are imperfect but hide it well. All my colleagues think that I am a calm person with a sense of humour. I keep telling them that I am not and they should speak to my children who have seen me loose my calm.

I can relate to that! Why is it that children are such experts at getting us to lose our calm? I'm sure mine could tell you a few stories...

Oh my gosh, this was so cute. And I really can't believe you aren't as organized as you appear. You totally have become my model of organization! Ah, we are all perfectly imperfect. It is our perfection that gives us the expertise we share in our blogs. It is our imperfection that allows us to connect with our readers as real human beings.

Oh, and I was in the supermarket a few months ago and passed one of my weight loss clients holding nothing but a bag of chips and something else not so good. Oops.

Oh dear, that scares me that I'm a model of organization to anyone! Sure you don't want to rethink that? :) I like that - perfectly imperfect. And I had to laugh at your client with the junk food. Busted!

I am new to your blog- it is fantastic. This post made me smile- love your writing. You can mark that down as one of your superhero skills! :) Following on Bloglovin and sharing some Sverve love!

Hi Amy, it's so nice to meet you and thank you! Glad to make you smile, and I'm heading over to return the love! :)