A guppy love or agape love? Maybe they’re the same thing in this sweet story of how we support those we love when they’re having a hard time. 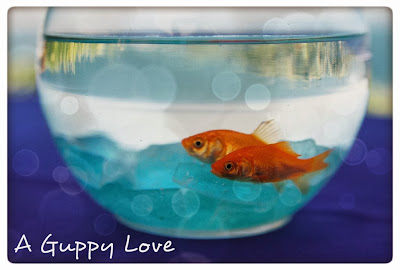 My husband told me a beautiful story the other day.  I didn’t think it was beautiful at the time. In fact I found it sad and confusing at first, but then I realized that it was perfect.

When he was a small boy growing up they didn’t have much, but he had a goldfish. He loved that goldfish and took good care of it.  Then one day, as goldfish often do for no apparent reason, the fish tried to die.

He came home from school to find the fish floating on its back in its bowl, all but gone. Distraught at the thought of losing his guppy, he stuck his little finger into the water and nudged the goldfish right side up again.  It just floated there listlessly, so he gently pushed it around in its customary circle.

The goldfish fluttered a bit and began to slowly swim a little.  Satisfied that he had saved his fish, he went about his day.  Later when he checked, the poor fish was belly up again.  Not ready to give up, he once again pushed the goldfish back on its tummy and made it swim a little.

Finally, after many such episodes, the goldfish apparently realized that it wasn’t getting out of this life so easily and perked back up to resume a normal life for a good long time afterwards.  He saved his goldfish by simply refusing to give up on it and doing the only thing he could think to do for it.

He told me this story as I was having a particularly bad day.  The kind of day that makes you think you might need more than a good cup of coffee to get you through.  You know the kind.

I was feeling lost and confused and ready to give up on everything.  As I sat next to him on the couch and poured out my tears and frustrations, he put his arm around me and told me this story. While I was wondering whether to be offended at being compared to a half-dead goldfish, he said, “Don’t worry Honey, I’ll turn you over and push you around.”

Sometimes we women wish our men were a little more nurturing, more talkative, and more…well, like us. There are times when we need a shoulder to cry on, and our husbands are (through no fault of their own) more hurtful than helpful.  But then there are moments when you just have to appreciate that this man whom God has given you is exactly what you need.

He may not be another you, but he’s better.  He’s uniquely him.  And that is good.

The day after hearing the goldfish story from my husband, I sat next to him in church, listening to our pastor preach on husbands loving their wives with agape love.  (Agape is the Greek term for the type of love that is similar to how God loves us.) I realized I have a husband who loves me with agape love, or as I will henceforth think of it: a guppy love.

So here’s to my husband who turns me over and pushes me around, when I think all I really want is to go belly up in my fishbowl.  He keeps me swimming, whether I want to or not.  And that is love.